As part of historic plans to develop Alexandra Dock, noise monitoring was undertaken at the adjacent Victoria Dock residential estate in 2004-2005. Fixed unattended monitoring equipment was positioned close to the boundary of the estate and the industrial area. The ambient daytime noise LAeq (i.e., the average energy intensity of noise as perceived by the human ear), during 2004-2005, was found to be in the region of 54dB(A) (i.e., equivalent to the noise generated by a quiet office or family living room). A follow-up study in 2010 found that this figure had not changed. Such ambient noise levels are not deemed to be obtrusive or a cause for concern in terms of environmental health. In terms of meeting the planning conditions put in place for the Green Port development, and maintenance of acceptable levels of noise pollution from the industrial area, a sound barrier was constructed between the western boundary of the dock and the Victoria Dock estate.
Since commencement of Green Port operations, noise data has been collected by KHCC from the same unattended monitoring site used during the project planning phase (i.e., at the boundary of Victoria Dock estate and Alexandra Dock). Although not widely welcomed by residents due to its visual impact, noise data for the period Jan-Feb 2017 suggests that the sound barrier is limiting the environmental impacts of the Siemens-Gamesa facility in terms of noise pollution. The below image shows average ambient noise levels recorded over a 24hr period during Jan-Feb are commensurate with the figure recorded prior to construction of the facility (i.e., 50.6 dB(A)), and never reach levels that, if witnessed in a workplace, would be deemed to require hearing protection (i.e., 80 dB(A)). Notably, the mean for fast maximum noise impacts (LAFmax) similarly fell within acceptable levels (i.e., 61.7 dB(A)) with only the occasional intrusive sounds being recorded (i.e., 80 – 100 dB(A)).

Notes: dB(A) refers to ‘A’ weighted decibels. In terms of noise measurement, decibels are a measure of the intensity or power of a source of noise. The ‘A’ weighting is a relative value of a noise source as an approximation of how the noise is perceived by the human ear at low and high frequencies. Data shown is for 5-minute intervals over 24 hours, Jan – Feb 2017. The lower red line represents 50 dB(A), equivalent to the background noise generated by a conversation or quiet office space. The upper red line, 80 dB(A), is equivalent to a spinning washing machine or city traffic. 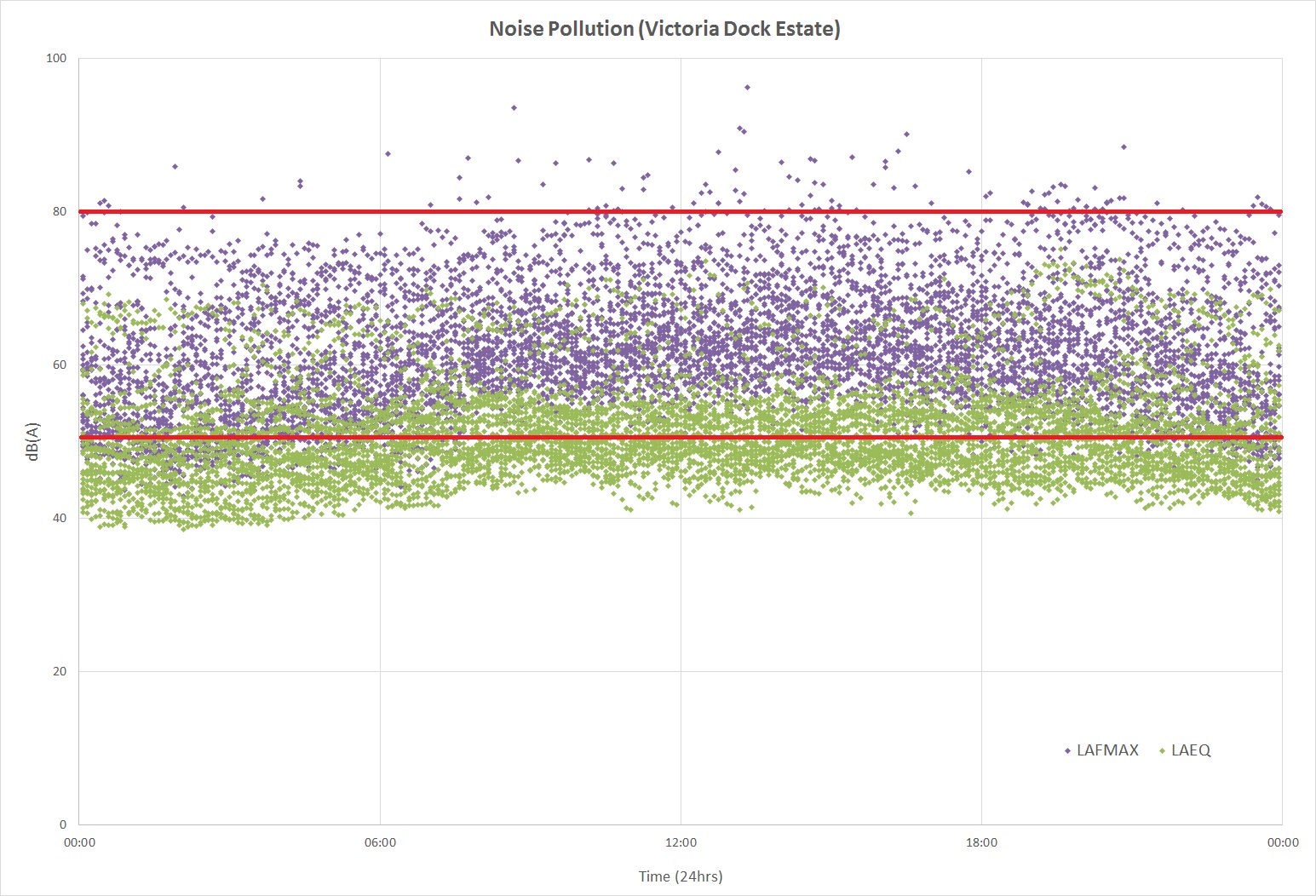